Our yoga mats sometimes find themselves side-by-side at the Saturday morning Power Flow class. But I first met Amanda Stevens around seven years ago when our daughters attended crèche together. We were both (and still are) mums juggling careers, kids, family, being part of a community and wondering what our next good read might be. (FYI: We had vastly different opinions about Eat, Pray, Love but have mutual love for The Elegance of the Hedgehog.)

While managing a corporate life, Amanda found time to join the crèche parent’s committee where I got a little glimpse into her passion for good governance and positive change. It was during this time she took the leap to leave a role she’d owned for 10 years to start her own consultancy, focussing on promoting diversity in Australian business, particularly gender diversity in senior roles and boards. And it was this move that gave her space to seriously consider running for local government. Which she successfully did – in her first go at it. Not only did she win her seat, she was also elected mayor by her peers. Not only that, she’s continued to have the support of her fellow councillors and hold the role of mayor for an unprecedented three years. To say that I think she’s a bit of a leaping rockstar doesn’t even touch the edges of my admiration for her intellect, energy, humility and get stuff done-dedness grit.

Please watch this space for what Amanda’s next leap might be. I’m hoping with all my might that she has her sights set on Canberra.

A teacher at first and then a lawyer in high school.

I was attracted to the idea of doing something academically challenging and making a contribution to the community. Law or medicine seemed to me to be two opportunities to do that and my skills were more attuned to studying law. I saw law as a way to positively impact the community and was perhaps naively focused on social justice, especially equality for women.

I was somewhat disappointed by the actual practice of law, which in my case as a commercial litigator was more about ruthlessly pursuing your clients interests rather than what was morally or ethically right. I sought a job at the Corporate and Financial services regulator (ASIC) as a way to “wear the white hat” and pursue a more ethical agenda.

I spent 10 years at university. I really enjoyed university, the interaction with students in tutorials, thrashing out the big issues, hearing from lecturers being exposed to new ideas. Initially I studied Economics, I found the calculus difficult and uninteresting, eventually transferring in third year to Arts then a year of Honours with a thesis and course work, followed by a post graduate Law degree.

Whilst at ASIC I undertook a Master of Laws part-time at University of Melbourne, this took 5 or 6 years but I really enjoyed some of the subjects such as Mediation and Proof in Litigation.

More recently, I’ve been interested in the study and practice of leadership. In 2012 I traveled to Boston to attend a week long live in leadership course for women and in 2013 I attended Cranlana, an ethical leadership course run by the Myer Foundation. It was a course were you undertook a number of readings of classical thinkers and modern theorists and then discussed them in groups. It was challenging and enjoyable. 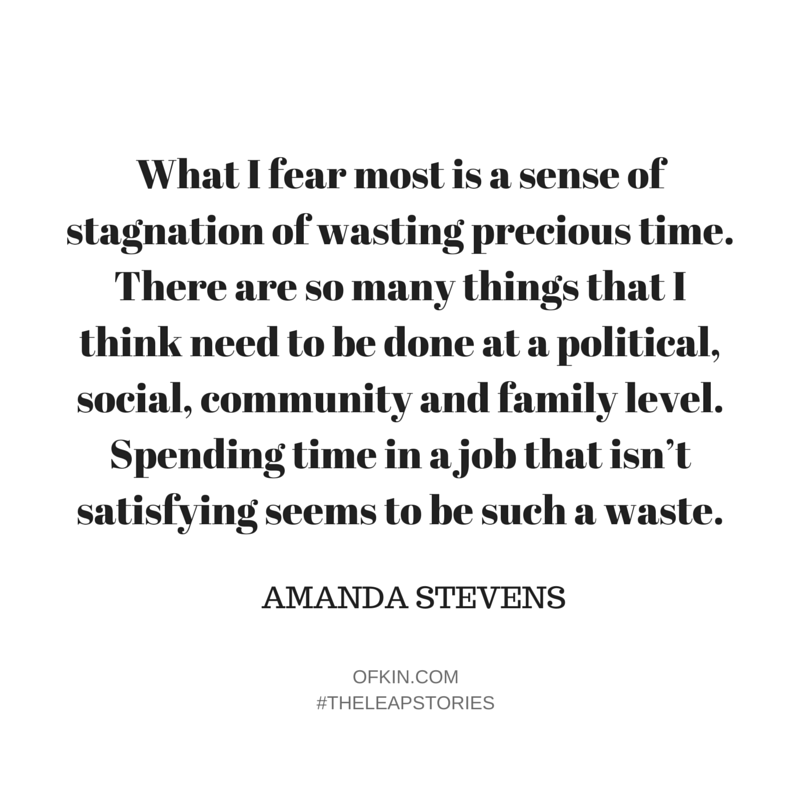 Leaving ASIC after 10 years was very difficult and scary. I didn’t know what I was going to do I just knew that I needed to change. Started my own consulting business, I really enjoyed working for myself, although it was really hard too. I missed being part of a team and achieving team goals and I wondered whether I would ever have another client and whether I had anything to offer.

Working as a National Manager at ASIC, I was leading a large team of 200, a strong multidisciplinary team that covered 4 states. I was exhausted and felt that I wasn’t passionate about the work that I was doing. Travelling was a big sacrifice to my family and the sacrifice didn’t feel worthwhile anymore.

My father and my husband are both huge sources of unconditional love, support and wise, sometimes challenging, advice.

My first boss Frank, taught me about integrity and how to work hard but take the breaks when they came. I was thrown in the deep end at the beginning of my articles year taking on the file load of a third year solicitor who had left just prior to me starting.

There was a senior executive at ASIC who have gave me responsibility far beyond my experience. I learnt a great deal from the success and failures that stepping up to that challenge brought.

Just after my leap from ASIC I sought the advice of a career counsellor, who I have seen off and on over a number of years. She is very good at challenging my assumptions and thinking about myself and has emboldened me to want to lead.

Nothing! When I left ASIC I did so as a sabbatical. So, theoretically, I could have returned. I knew at the time this was unlikely but it was good security. I knew that I wanted to have a go at starting my own business but I was terrified about failure. My identity was very attached to the label of being a successful lawyer and earning good money. I felt very vulnerable giving those things up for an uncertain future.

What was your defining ‘I can’t do this anymore’ moment that lead you to the leap?

It was a slow realisation that I wasn’t being challenged anymore and that I needed to do something different. But I do remember a specific meeting with a superior that broke something in me and I decided that I didn’t want to be a part of that team anymore. 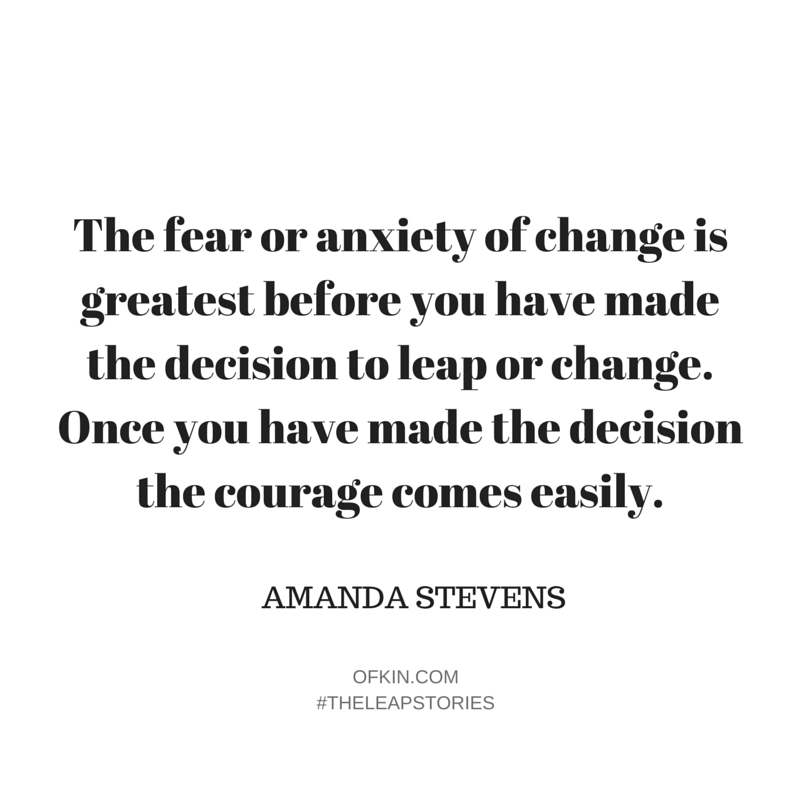 I think that sometimes what you are doing becomes intolerable and you start to think that even the fear of failure or failure itself would be better than continuing on in the way that you have.

What I fear most is a sense of stagnation of wasting precious time. There are so many things that I think need to be done at a political, social, community and family level. Spending time in a job that isn’t satisfying seems to be such a waste.

Sometimes I find that I am fearful of an interaction, conversation or change but I step into the situation anyway. “Step into the fire.” I have found that often the anticipation of these interactions is worse than the interaction itself.

I try not to give situations an excess of emotion or drama. It’s important to recognise the emotion or intensity but to not dwell on it. I try to keep on solving problems rather than getting stuck in the emotional content of the situation. “Control the controllables” is a saying that I like. I try to be kind to others and myself. I like to empathise and understand the motivations of others.

I find writing things down and discussing them with a trusted friend really helps clarify my thinking. I also really enjoy yoga and meditation as a way of managing stress and turning off.

What other leaps have you made in the past?

Going backpacking overseas for a year in the middle of my law degree. I spent 7 months in South East Asia and Central America. Most of the places that I travelled were very poor. I travelled on local buses. Taking that time out to think and reflect made me very determined to come home and finish my studies. I really wanted to be able to contribute and be financially independent.

How would you rate your level of happiness about making your leap? 1 being sad, 10 being rad.

Now 10! Closer to the actual leap much less…

Regaining my passion and finding a place where I feel that I am making a real contribution. The feeling of control over your life. The happiness of doing something that you love.

What’s the biggest downside to making the leap? 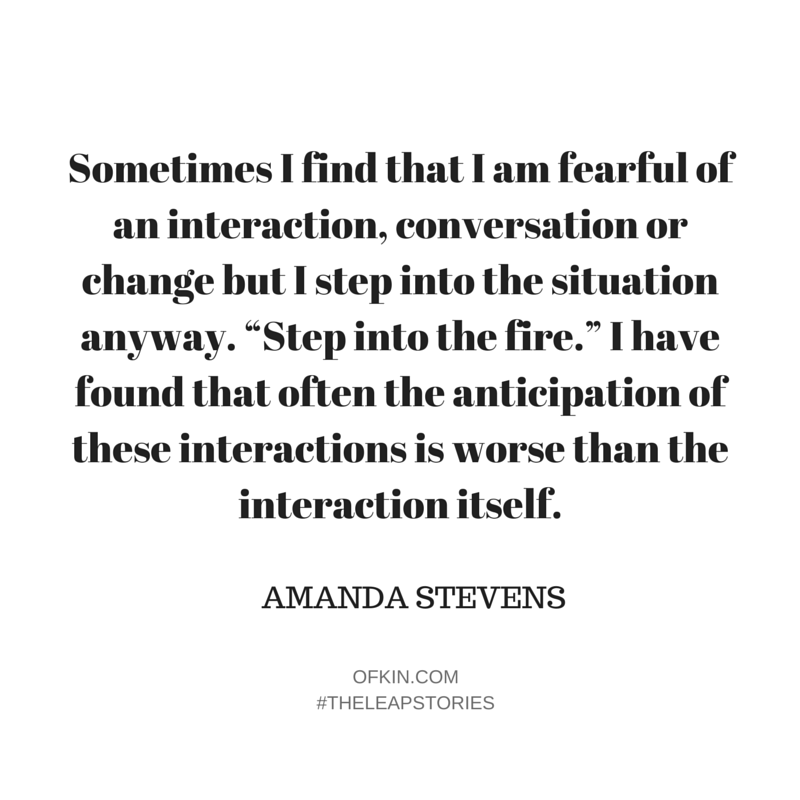 Mmm not sure. I have always harbored a desire to write. I would also like to continue to represent my community but we’ll have to see how it goes.

Mandy Burns, CEO at Ardoch a not for profit that helps kids stay engaged in school. Mandy gave up her psychology practice to work at Ardoch. 15 years later she became CEO. 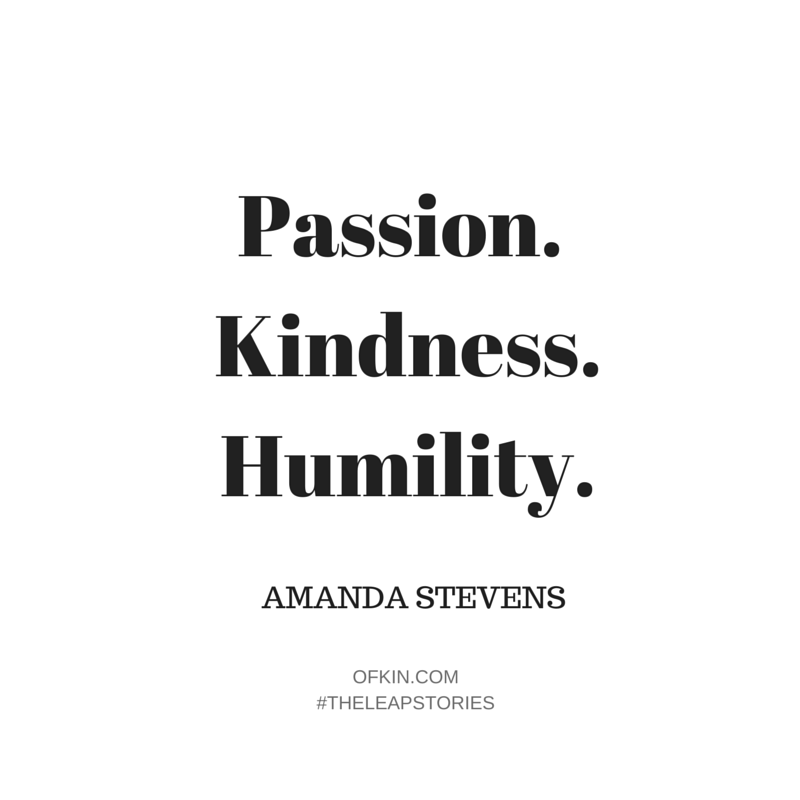 It is difficult. Financial realities and a lack of support can make change very challenging.

I think that spending time identifying your passion is very worthwhile. Then, take a small step forwards. Seek support.

Right now I’m: Working hard and loving my role as Mayor for the City of Port Phillip. The immediacy of working with your local community is very rewarding and challenging.
Hearing: From my community. I spend 4 nights a week at board meetings or community meetings, listening and really trying to hear.
Eating: As much fresh stuff as possible. I am currently the Chair of the South Melbourne Market Committee of Management and I really love shopping at the south market. It has such a great community feel. The stall owners are passionate and the food is great.
Drinking: Lots of coffee and water.
Reading: Lots of papers for Council meetings and Board meetings and not enough fiction.
Loving:Running along the foreshore and time on Middle Park beach.

From fellow crèche mum, to book club compadre to yogi wannabe. From lawyer, to consultant to mayor to… Watch this space. In the meantime let me know you favourite insight about Amanda’s story by leaving a love note below. 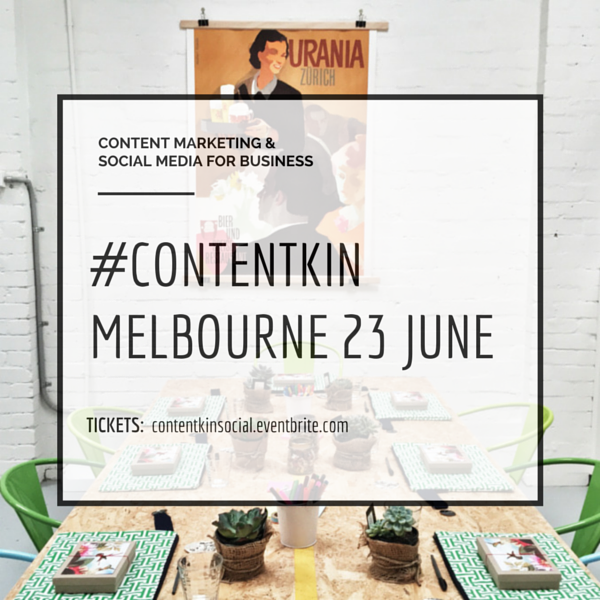 We’d love you to join us in Melbourne for our Content Marketing and Social Media Workshop for Business coming up before the end of the financial year. Get your content marketing planned and your social media on track for a productive, effective and efficient (and fun!) 2015/16.  Spend a day learning, planning, eating tasty treats and making friends with like-minded kin in real life (the best kind of social media there is).