When I registered my business name nearly eight years ago, I was drawing on the idea that I wanted to connect with people who cared about the same things I did, and while they may not be direct next-of-kin in the truest sense, they somehow felt like another family, like kin. Because having a sense of belonging, of being seen and accepted is what keeps us connected and alive. Belonging is one of our most primal needs.

So a few months back when I tripped over Belong magazine on Instagram, it was no accident that it felt like home. The magazine’s mission is to celebrate the art and community of blogging, social media and entrepreneurship. It aims to inspire women to use their passions for a purpose, to encourage women to be authentic, to be life-giving and to encourage one another. It wants women to know that they are enough, that they matter and that they have a place. That they belong. I was in!

But more than that, my sticky beak wanted to know who was behind such a beautiful publication, and how did she manage to write every article just for me!

Brooke Saxon-Spencer had worked most of her adult life in a family owned health care business, where she was responsible for administration. Then the day came that the business was sold. A sense of belonging in her work had to be redefined.

Her leap was to actually go back to interests she explored in college – graphic design, photography and writing  and start anew. Brooke wholeheartedly shares that she’s still figuring it out as she goes along, that Belong is a side gig that’s still an investment, and that sometimes anxiety gets the better of her. But she’s just got a tattoo to help with that. 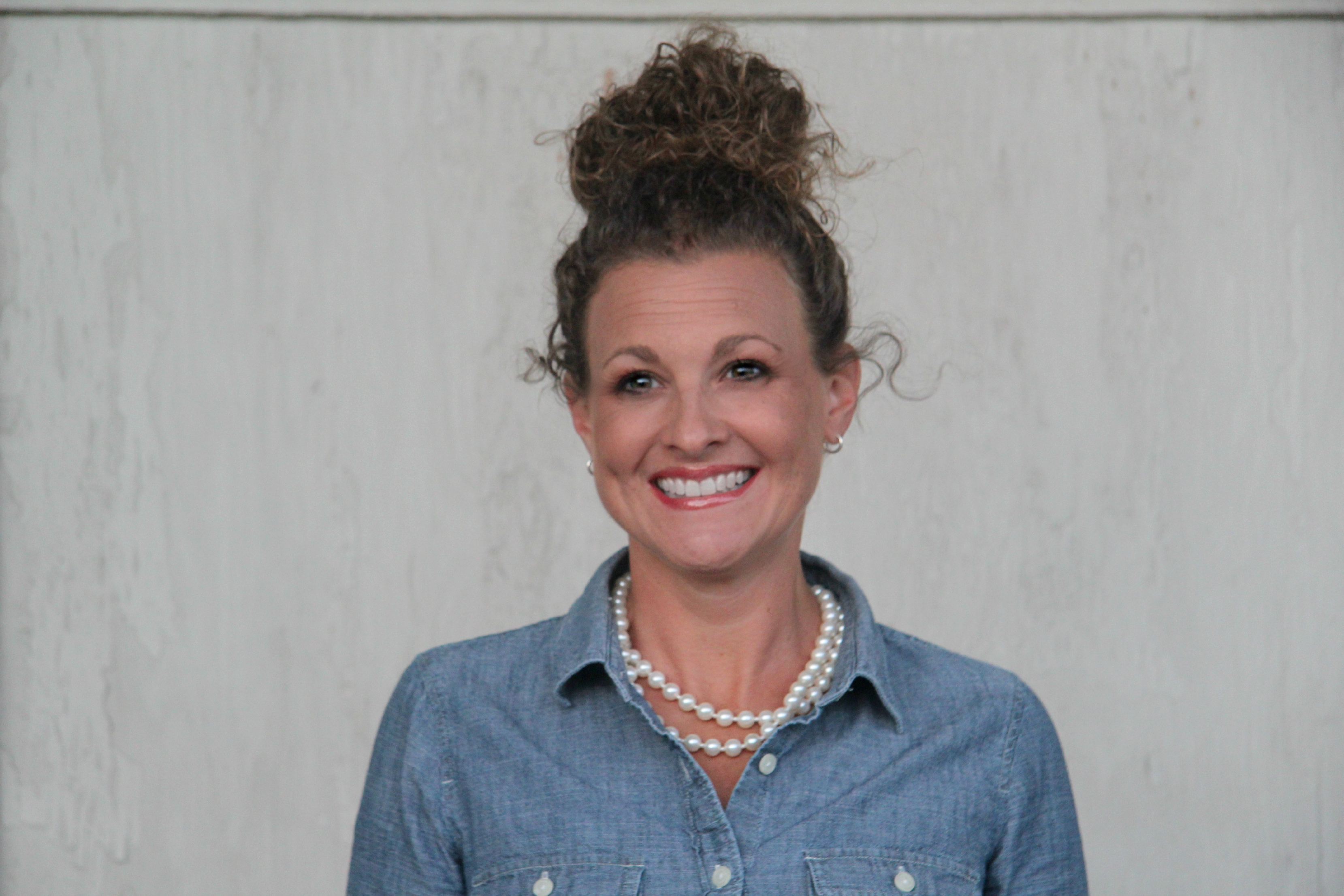 I wanted to be a singer, a teacher or a mummy. The latter two were obviously more realistic. They seemed like acceptable and traditional roles for someone with my background.

In college, I studied photography (in the actual dark room where we rolled our own film into canisters and printed our own pictures on paper with chemicals), graphic design (the real ‘cut and paste’ method with an exacto knife and glue) and creative writing (thankfully, that hasn’t changed much). 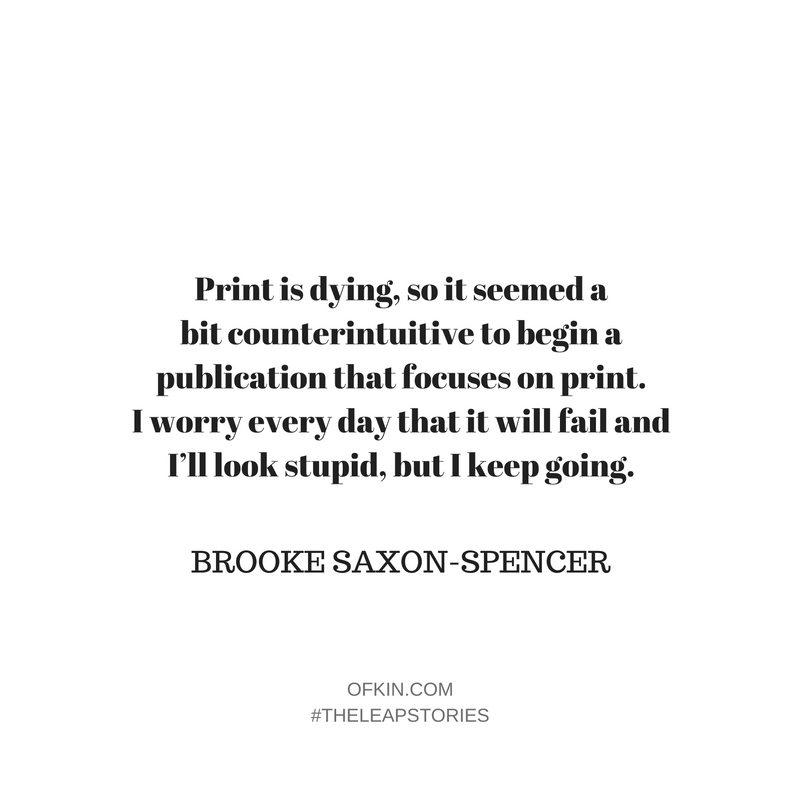 Starting Belong magazine for sure. Print is dying, so it seemed a bit counterintuitive to begin a publication that focuses on print. I worry every day that it will fail and I’ll look stupid, but I keep going.

I worked in health care administration for a long time, doing everything from billing to marketing. Long before that, I spent several years in retail. 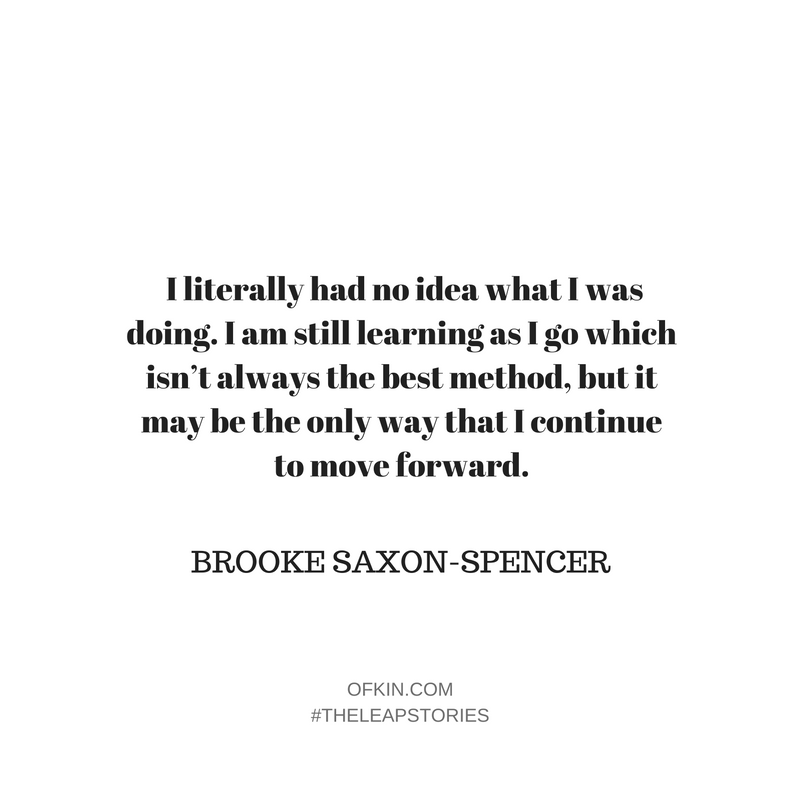 I worked for my family’s business in healthcare, so that was a major influence. I was fortunate to work alongside my brother and my dad for many years. My faith influences everything that I do, as does my family, husband and kids. My love for creativity and community are what has influenced and pushed me into the realm of this magazine gig.

Nothing. I literally had no idea what I was doing. I am still learning as I go which isn’t always the best method, but it may be the only way that I continue to move forward.

What was your defining ‘I can’t do this anymore’ moment that lead you to the leap?

My family sold the business I had invested my entire adult career into. It was terrifying knowing that my family was depending on me, but it was also incredibly freeing, realising that I could do whatever I wanted.

Before starting Belong, I spent lots and lots and lots of time in self-reflection, trying to find out what I was made to do or what it was that I would do if I could choose anything. I spent a lot of time reading, journalling and talking with my husband. I reached out to some people who I thought might have some insight on my idea (that was super hard to do and scary all on its own).

Fear: Fear // What originally got me moving towards publishing the pilot issue was realising that it was fear itself that was keeping me from beginning. It made me angry that I was letting fear stop me! So I decided not to let it anymore. I set some deadlines and just pushed ahead, fear and all! 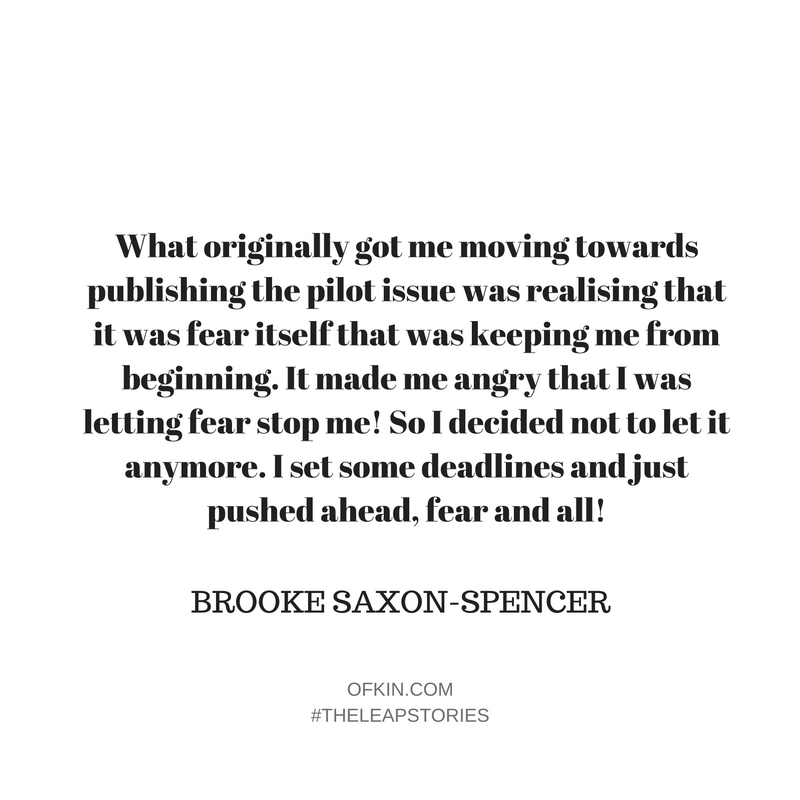 Fear: Failure // I know I’m not alone on this one. No one wants to fail. It feels horrible all around, but reminding myself and having others remind me that failure doesn’t define me was a kick in the pants. I also realised through a blog post from a friend that being ‘free to fail’ means that we are actually DOING and TRYING and not just sitting still. This is big. I don’t need to prove anything to anyone.

Fear: Finances // Essentially, finances represent security to me. Being able to pay the mortgage and have money for groceries and gas and so on is pretty important to me, and I’m sure to most of us. The idea that this was going to cost me (and my family) was terrifying, but the cost of not doing it meant that I was afraid, which lead back to the first fear of fear itself. I didn’t want to let fear lead my life. Who said that the bigger house is always better? And who says that the magazine is going to be the only thing that I do? Maybe I’ll have to work two (or three) jobs (like I’m currently doing) to make it all work. That’s ok. It may not look like I thought it would. And it takes time. Money doesn’t roll in overnight. It takes time. And work. Lots of it. 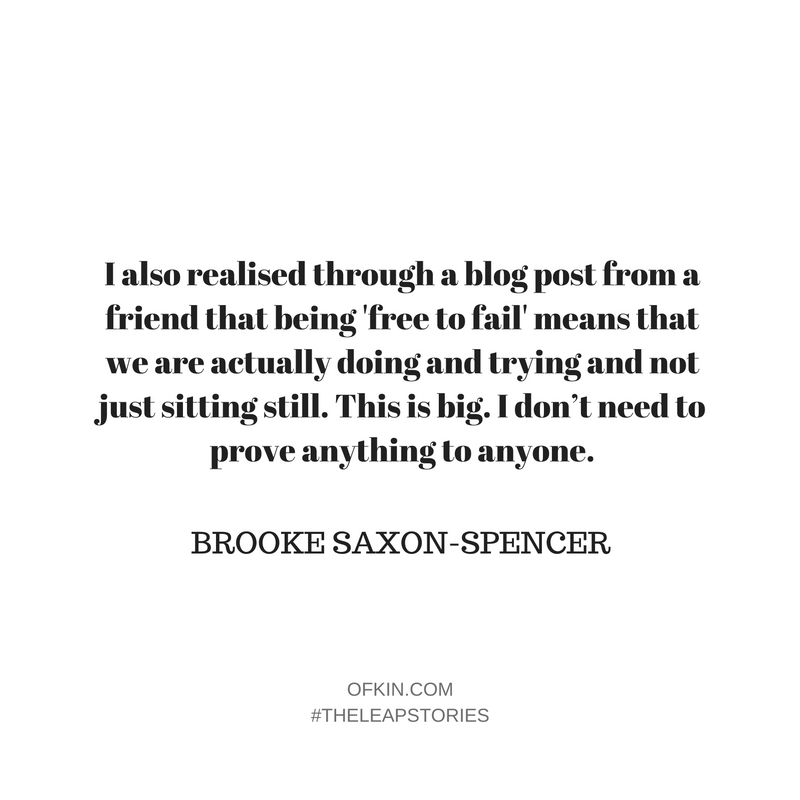 I failed at kickstarter funding right at the get-go. It was awful and made me feel like such a failure. I see now why it didn’t work out, but it was still so hard. I ended up funding the magazine with my own money. We have yet to break even, but I feel it’s coming soon! I’m blessed to have had things work out in such a way that I was able to fund the magazine a bit on my own, I know that not everyone has this ability.

We made a leap as a family three years ago to move away from all of our family and friends to SoCal (Southern California), one place I said I’d never want to live. My husband had a job opportunity. Things have not worked out the way we thought and there have been bumps, but we’ve not regretted the move. 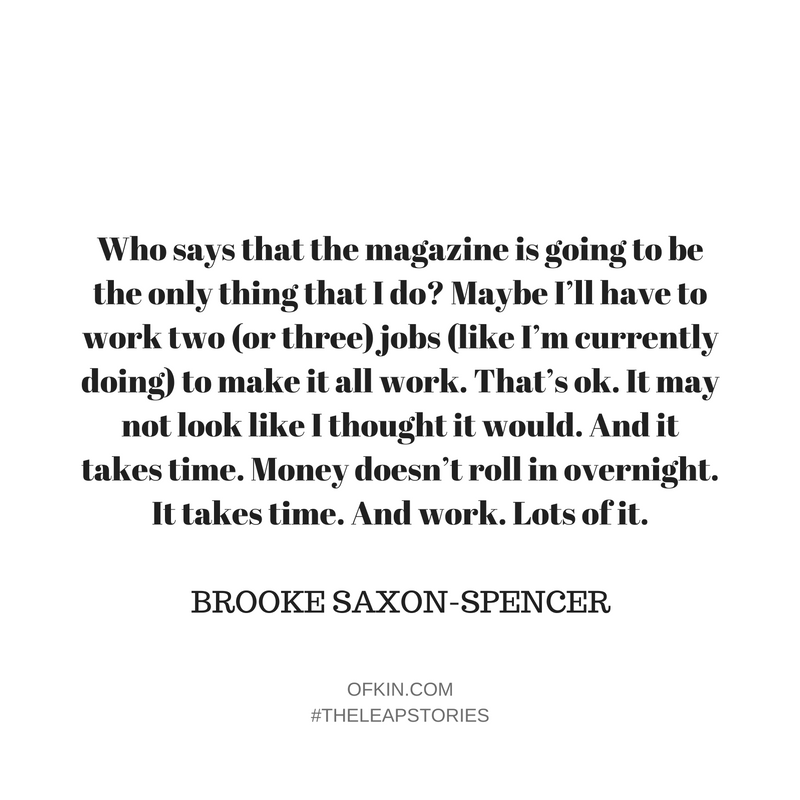 We kept going (can you hear Dory singing, ‘Just keep swimming…’? That phrase echoes in my head all the time). I pushed through the struggle (and the pill-popping anxiety) in order to face the next day and then the next and the next. Sometimes, that’s all you can do. And before you know it, you’ve made it onto the next thing! 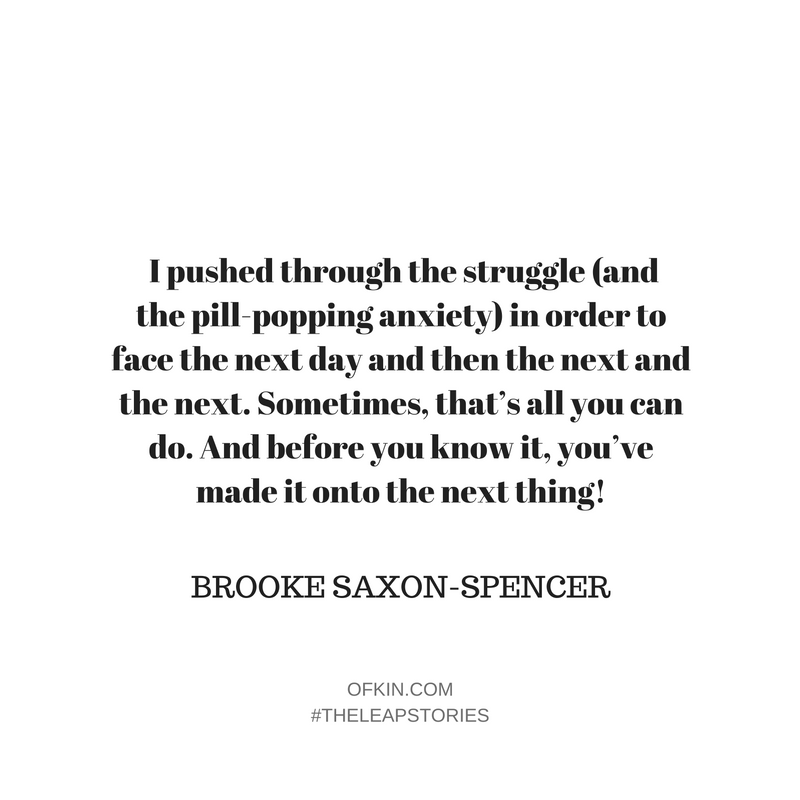 Failure. Not making money. Having to move out of our home. It strikes so close to the heart. I don’t like not having the security I’ve been so accustomed to and it’s very humbling.

10 for sure. That doesn’t mean that it feels like a 10 every day, but I certainly have no regrets about leaping. 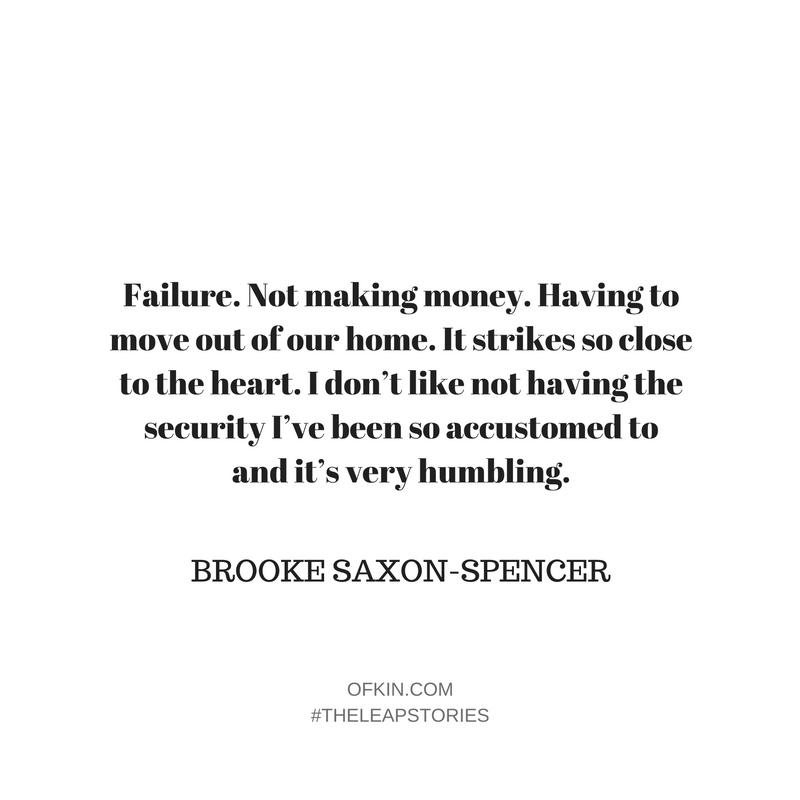 Getting notes and messages from women who are being reached by the message and mission of Belong. It’s so incredible!

Anxiety. Thankfully, my husband is a great support. I also journal and read and have a few friends (if you can believe it, some who I’ve never met in person!) who I feel really understand me and where I’m coming from. I can shoot them an email and they are there reminding me of the things I need to remember in those moments when I’m lost in the worry and angst. 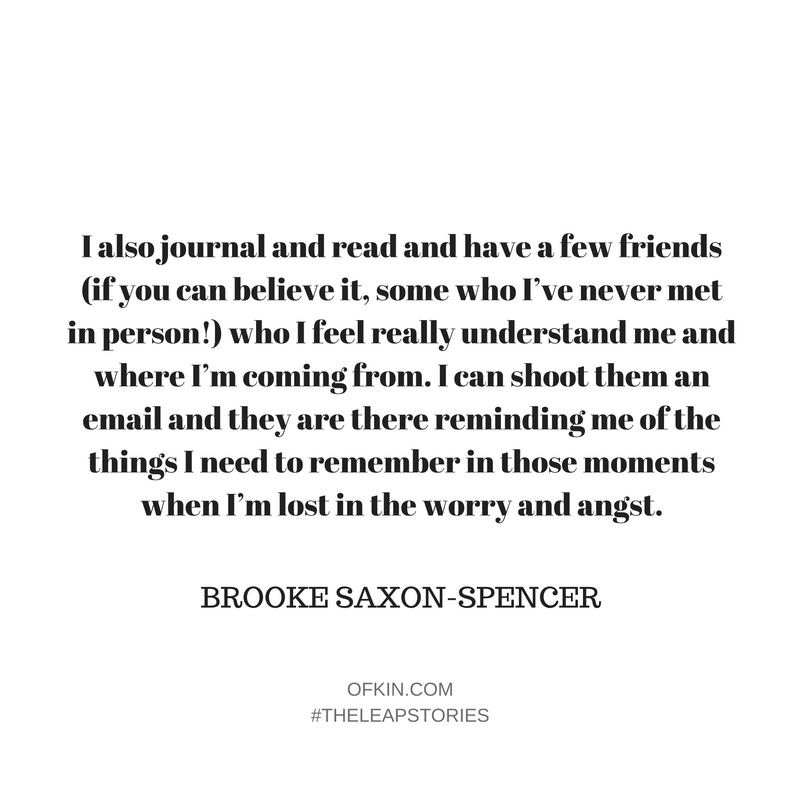 A conference maybe? There are so many conferences, but I think that the community of Belong is growing and I honestly think my skillset lines up with this sort of thing. It sounds so fun!

BE STILL. I just had it tattooed on my wrist. Sometimes, we need to stop all the craziness, sit down and do nothing. Take some deep breaths. 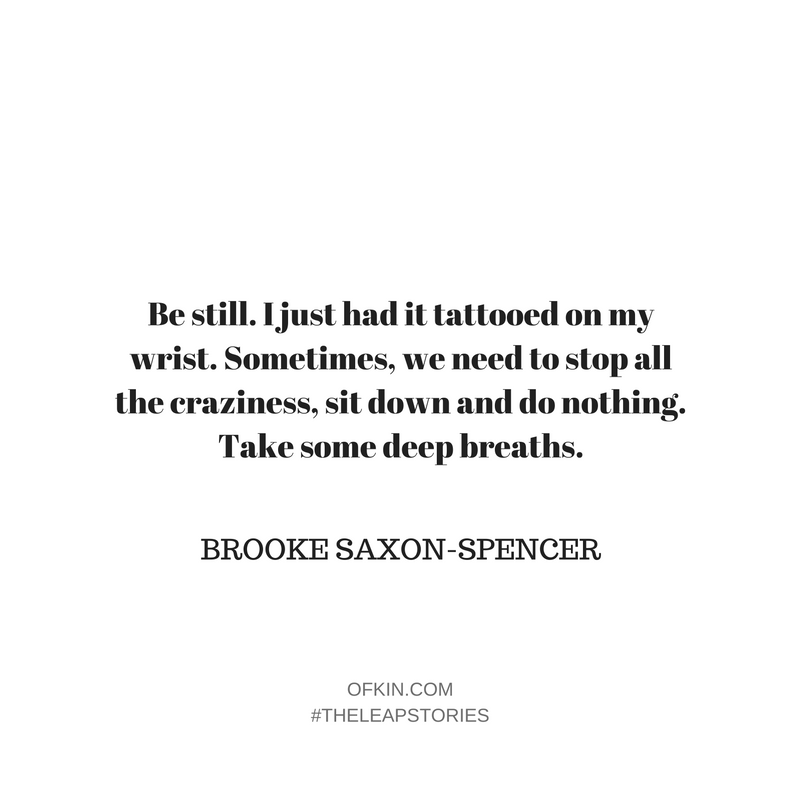 I’m not sure that they have all ‘leapt’, but they’ve inspired me in my journey and I admire the work they’ve done and do: 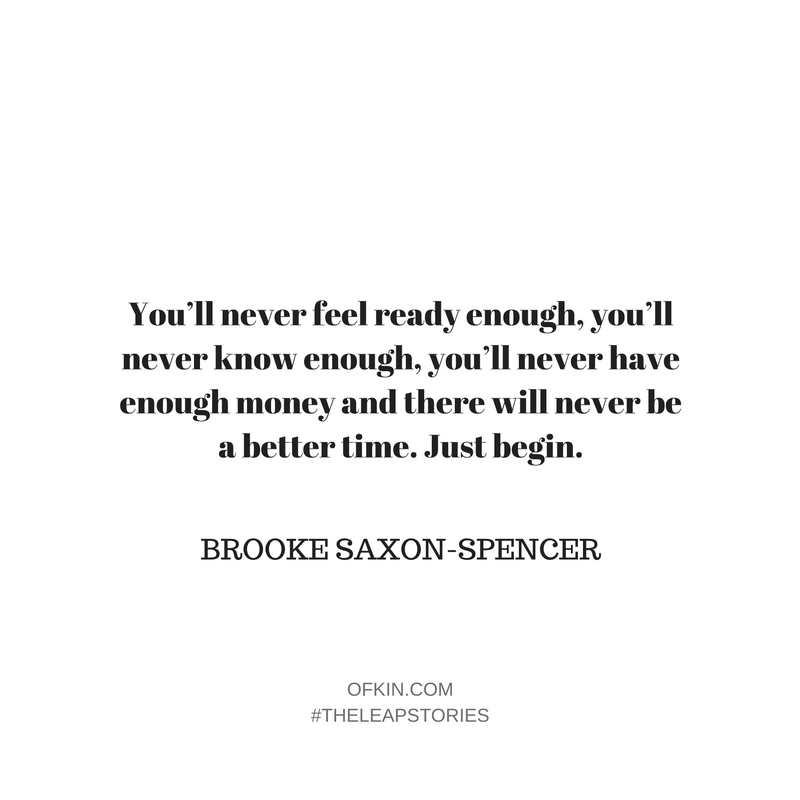 Hearing: The radio –I’m an alternative girl.
Eating: m&ms
Drinking: Caffeine free Diet Coke with a splash of lemonade
Reading: Do I actually have to admit this?!? I like to read what my 14 year old daughter reads, so I am reading Lady Midnight by Cassandra Clare. To redeem myself a bit, I’m also reading Brené Brown’s Rising Strong.
Loving: Sitting outside journalling. 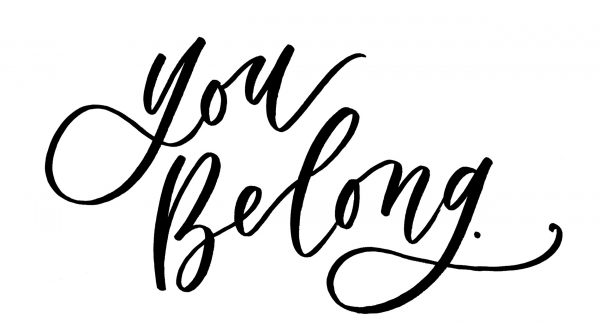 There is so much wisdom to be found in your heart when you take a moment to be still, reflect and put pen to paper. It’s how leaps are fertilised and incubated. And if you ever need a little dose of extra courage to begin a leap, know that you belong with a family of kin who started just right where you are now. So just keep going.